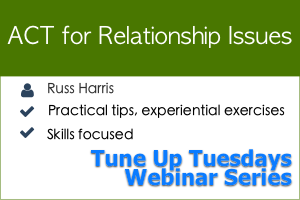 Please note: you will only have access to view the recording until 5pm UK time on the 5th of October

This webinar loosely follows the protocol of Russ’s best-selling self-help book, ACT With Love,
and also looks at attachment theory, and how it fits with ACT. Learn simple, practical strategies
for using ACT with common relationship issues – including values conflicts, disconnection,
infidelity, aggression, lack of intimacy, and loneliness. Also learn how to apply ACT with any
sort of attachment issue.

Please note: you will have access to the recording for 3 weeks after purchase.

Russ Harris, author of the international best-selling self-help book ‘The Happiness Trap’, is a world-renowned trainer of Acceptance & Commitment Therapy (ACT). Russ’s background is in medicine. As a GP he became increasingly interested in the psychological aspects of health and wellbeing, and increasingly disenchanted with writing prescriptions. Ultimately this interest led to a total career change. He now works in two different, yet complementary roles – as a therapist and as a coach.

Since 2005, Russ has run over 600 two-day workshops and provided ACT training for over 35,000 health professionals, including therapists, coaches, counsellors, doctors, and psychologists. He has authored three ACT textbooks (ACT Made Simple, Getting Unstuck in ACT, ACT Questions & Answers), and six ACT-based self-help books, including The Reality Slap, The Confidence Gap, and ACT with Love. His first book, The Happiness Trap, is now the best-selling ACT book in the world – with over one million copies sold, and translations into more than 30 languages. (To download the opening chapter, click here.)

Russ has a unique model for training, which he calls ‘ACT Made Simple’, because it covers so much material in a short space of time. (In fact, he even has even written an introductory text book on ACT, titled ‘ACT Made Simple’. To download the first chapter, Click here.) Russ proudly proclaims each workshop a ‘jargon-free zone’ – and bases his training on three core values: simplicity, clarity, and having fun. His highly-acclaimed ACT workshops are brief, powerful, cost-effective and life-enhancing. Participants regularly report not only major improvements in their therapy and/or coaching, but also in their personal lives – and evaluation forms frequently praise his ability to make complex ideas seem very simple. (For examples, go to testimonials)